Sayyid Ahmad bin Muhammad Zabara, Mufti of the Yemen Republic, who died in Sana’a on 23 July 2000 at the age of 92, was a member of one of the most prominent sayyid families in Yemen. His line extended back to al-Hadi Yahya bin al-Husain bin al-Qasim (a scion of Imam al-Hasan, grandson of the Prophet) who, at Sa’da, in the last decade of the 9th century, founded the Zaydi imamate which survived until the revolution of 1962.

Sayyid Ahmad, like the great majority of inhabitants of the northern regions of Yemen, was a Zaydi, a branch of Shi’a Islam which derives its name from Zayd bin Ali Zayn al-’Abidin who was killed in battle outside Kufa in Iraq in 740. His forebears had for centuries served the Zaydi imams as provincial governors and judges, and many members of the family were outstanding scholars of Islamic law and the Arabic language. The family name of Zabara dates back to Sayyid Ahmad’s ancestor Amir al-Husayn bin Ali, a military commander under the 16th century Imam Yahya Sharaf al-Din, who came from Zabar, a hamlet between the villages of Jahana and Dar al-Sharif, in the upper reaches ofWadi Maswar, in the tribal region of Khawlan al-’Aliya south-east of Sana’a. Al-Husayn’s son Ahmad was a prominent supporter of Imam al-Mansur bi’llah al-Qasim bin Muhammad (ancestor of the 20th century Imams) in his campaigns against the Ottomans who had invaded and occupied much of Yemen in the 16th century.

Sayyid Ahmad’s father, Muhammad bin Muhammad Zabara, was a renowned historian and man of letters who compiled histories of the Zaydi imams and biographical dictionaries of prominentYemenis, most of which have been published.

Sayyid Ahmad (the oldest of his father’s 11 children) was born on 25 January 1908 in the village of al-Kibs, south of Jahana, some three years after the accession of Imam Yahya. At that time the Ottomans, who had invaded Yemen for a second time in the 1880s, occupied San’a’ and the main towns. When Zabara was still a boy, his family moved to Jahana where his father had been appointed ‘amil (governor); here he received a traditional education in Arabic grammar, religion andflqh (jurisprudence). In the late 1930s he accompanied his father to San’a’, now the capital of the independent Mutawakkilite Kingdom of Yemen, and there embarked on a course of advanced studies in theology andflqh under some of the leading Yemeni ulema (scholars) of his day, such as Qadi ‘Abd al-Wahhab alShamahi, Qadi Husayn bin Ali al-’Amri, and Sayyid Ahmad bin Abdullah al-Kibsi. A few years later he was summoned by the Crown Prince, Sayf al-Islam Ahmad, to Ta’izz, where he taught at the Theological College (al-madrasa al-’ilmiyya) and became tutor to the Crown Prince’s son, Muhammad al-Badr, whose sister, Amira Khadija, he subsequently married. Later, Imam Yahya appointed him head of the Shari’a Higher Appeal Board, a post which he held for 20 years; in August 1955 Imam Ahmad appointed him member of the 10-man Consultative Council headed by Muhammad al-Badr, now Crown Prince.

On the outbreak of the September 1962 revolution and the overthrow of Imam al-Badr, Zabara was fortunate not to have suffered execution, the fate of many who had held official positions under the Zaydi imamate. Nevertheless, he was imprisoned for over a year before being allowed to leave Yemen for Egypt. He eventually settled in Beirut and remained there until late 1967 when Qadi ‘Abd al-Rahman al-Iryani, by now President of the Yemen Arab Republic (as it was then called), invited him back to San’a’ to assume the new post of mufti (which had never existed under the imams). This, in effect, made Zabara chief religious authority in the land. Many believe that Zabara was instrumental in saving Iryani’s life in 1948 (following the assassination of ImamYahya in the abortive coup led by Sayyid Abdullah al-Wazir) by interceding with Imam Ahmad on Iryani’s behalf. 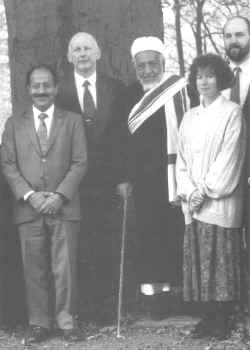 The Mufti during his visit to Durham University, 1992.

From the mid-1970s, Zabara taught Shari’a law and jurisprudence at the newly established University of San’a’. As Mufti, he represented Yemen at numerous Islamic conferences throughout the world. He maintained close links with Muslim communities in the former Soviet Union, and also visited those in China and Korea. His official visit to Britain in 1992 included calls at the Middle Eastern Department of Durham University, the Centre for the Study of Islam and Christian-Muslim Relations in Birmingham, and on the Archbishop of Canterbury at Lambeth Palace. He also visited Yemeni communities in South Shields, Birmingham and Cardiff.

Although Sayyid Ahmad added to the historical and biographical work of his father, his literary output was mainly poetry. This included a composition (1987) of 360 verses covering the history of Yemen from the time of ImamYahya’s father, Imam al-Mansur Muhammad (1890-1904), through the revolutionary period, up to the current presidency ofAli Abdullah Salih.

Zabara worked from his home in the Filayhi quarter of old San’a’, and was accessible to all who needed advice or afatwa (religious edict), including women who would come personally, or telephone. Often when out for a walk (and he attributed his longevity partly to his love of exercise) he would sit by the roadside dealing with requests for advice, and stamping his written replies with his seal. He detested any fanaticism in religion; once when there were complaints about women bathing at Al-Hudayda on the Red Sea, Sayyid Ahmad ruled that the sea belonged to God, and that those who feared for their morals should avoid it! He was also adamant in his view that women should not be forced into a marriage contract. In a newspaper interview in February 1997, he described Islam as a religion of tolerance which ‘accepts and respects all other teachings brought to humanity by messengers of God who came before the last Prophet, Muhammad . . . ’ The latter, he added, was the supreme example of ‘tolerance and avoiding prejudice which is a mark of ignorance’. The Mufti enthusiastically supported and worked for dialogue not only among Muslims of various schools of thought, but also between Islam and other faiths. It was his intervention which greatly assisted the Bishop in Cyprus and the Gulf to negotiate the restoration of Christ Church, Aden, as a place of worship in the early 1990s; in 1996 the Mufti had an audience with the Pope in Rome.

Although very much a traditionalist in dress and life-style, Sayyid Ahmad held some radical ideas; he believed, for instance, that the Zaydi imamate should not be restricted to the sayyids (Ahl al-Bayt), which was the traditional Zaydi viewpoint, but should be open to any Muslim with the necessary qualities and learning. Meanwhile, he encouraged young sayyids to study for technical and scientific careers rather than confine themselves to the judiciary, administration and teaching, which had hitherto been the general custom. A grandson of his was an engineer and one of his daughters was trained as a mid-wife.

The Mufti’s funeral, which was marked by prayers at the ancient Grand Mosque of San’a’, was attended by the President, senior members of the government, and ‘ulema from all over Yemen. He was buried at Majil al-Dimma, east of Bab al-Yaman, where his father had been interred forty years previously He is survived by 4 sons and 3 daughters from three marriages (his first wife dying in the 1940s).