David was born in Cornwall and after leaving Marlborough College joined the Duke of Cornwall’s Light Infantry. He later transferred to the Indian Army in which he saw service in the North West Frontier Province. He returned to England in 1948 and went up to Magdalen College, Oxford, where he read history. In 1953 he joined the Colonial Administrative Service and was posted to Aden where he remained until independence in 1967.

When he arrived in Aden David was first attached to the Western Aden Protectorate Office in Khormaksar, working as a political officer and spending periods up country in Wadi Yeshbum, Abyan and elsewhere; but by 1958 he had been posted to the Secretariat in Steamer Point. Towards the end of 1959, David, who had done a course in cooperative marketing while on leave that year, was appointed to the Cooperative and Marketing Department in Khormaksar. He remained there until the new Federal offices at Al Ittihad were completed, when he joined the Ministry of Finance, and later became Cabinet Secretary to the South Arabian Federation. In this role he was involved in the independence negotiations in Geneva in 1967. 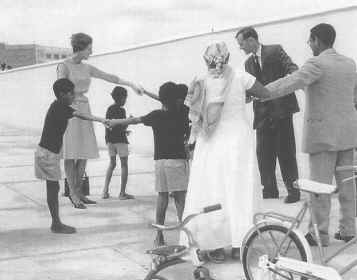 The contrast between living up country among mostly illiterate well armed tribesmen, and the problems which that involved, and living in Aden could not have been greater. By the late 1950s, the educational system in Aden had not only produced many boys and some girls educated up to secondary level who were competent to staff the many government offices and schools, but also graduates who had attended universities in Europe and Middle East, many of whom returned to Aden to take up professional posts. This led to much more socializing between expatriates and Adenis in homes, restaurants and clubs, as well as at public events such as the Khormaksar races. David had many Arab friends and was fluent in Arabic although this was no longer essential in the social life of Aden at this time. Visits by politicians and other personalities, including members of the Royal Family, added further stimulus to the social round. David led a busy social life, and even on quiet evenings enjoyed playing bridge. He was also a keen supporter of local football clubs not least in attending their matches at Crater Stadium. But there was another side to his life. When most expatriates who were not in their offices in the afternoons, were playing golf or tennis, David was to be found at the Reilly Centre for the Blind in Maalla, working with blind children and adults. An invitation to lunch with him on a Saturday was likely to be followed by an invitation to help drive groups of blind children to a swimming club and supervise their activities. It was for his services to the blind in Aden that he was appointed OBE.

In 1968 David embarked on a new and distinguished career with the International Monetary Fund in Washington. This involved considerable travelling in Africa, the Far East and elsewhere. He retired from the IMF in 1986 and returned to Cornwall, living at Place where his family had lived for several centuries. Place was a large house set in extensive gardens overlooking Fowey harbour — ideal for entertaining and David was a most hospitable and generous host. He became High Sheriff of Cornwall in 1991 and played a conspicuous part in Cornish affairs, in the National Trust in Cornwall, the Royal Institution of Cornwall, the Royal Cornish Museum and other local organisations.

In 1997 David developed a fatal illness but continued entertaining and playing an active role in Cornish life until his death on 3 April.