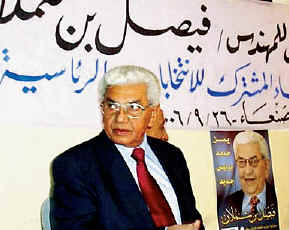 Faisal Othman bin Shamlan al-Tamimi, intellectual, technocrat and public figure, died in Little Aden on 1 January 2010 after a long struggle against cancer. He remained physically and mentally alert until the last weeks of his eventful life.

Born in Suwairi, near Tarim, the historic city of Islamic learning in Wadi Hadhramaut, he received his primary and intermediate education in Ghail BaWazir. At the time, modern education in the region was closely linked to that in Sudan where Faisal received his secondary schooling at the prestigious Bakht al-Rudha Institute, near Dueim on the White Nile. In 1959, after a spell as teacher in Ghail BaWazir, he left for Britain to study at Kingston for a degree in Civil Engineering.

His death touched many people in Yemen from all walks of life as testified by the thousands who attended his funeral and the numerous tributes to his memory published and broadcast in the media.

In September 1967 he was deputed to assist in the administration of the former Eastern Aden Protectorate after the departure of the Qu'aiti and Kathiri Sultans. When South Yemen achieved independence from British rule in November 1967, Faisal, aged barely thirty three, was appointed Minister of PublicWorks andTransport in the first post-independence cabinet of the People's Republic of South Yemen (later renamed the People's Democratic Republic of Yemen - PDRY).

In 1969, Faisal was appointed Executive Chairman of the Public Corporation for Electric Power which he ran successfully until 1977 when he became Executive Director of the Aden Refinery. He and his team negotiated an amicable transfer of the Refinery from British Petroleum (BP) control into national ownership. For the next ten years, under his leadership, the ageing Refinery was systematically modernised to become PDRY's major profitable industrial entity.

Between 1978 and 1982 I worked closely with Faisal as the Refinery's Medical Director and Surgeon-in-Charge (see BYSJ Vol. 16, 2008, pp. 26-33), and vividly remember our discussions in his house over endless glasses of sweet Hadhrami tea while he smoked his favourite rolled cigarettes, demonstrating his rapid grasp of medical issues and his readiness to offer me every possible support.

Despite not being a member of the ruling Socialist Party, Faisal was an active member of the Supreme People's Council (PDRY's parliament) and later became closely involved in the process which led to the unification of the two Yemens in 1990. After the brief civil war of 1994 he accepted the Oil and Minerals portfolio only to resign it a few months later when he found that the managerial autonomywhichhe, as Minister, had been promised was not forthcoming. During the 1990s he twice held the post within the private sector of Regional Director of al-Nimir Petroleum Company.

Faisal was well known and widely respected for his integrity; whenever any of his official appointments lapsed, he would scrupulously return his official car to government custody; in 2003 he resigned the seat which he had held since 1990 in Yemen's House of Representatives when the latter sought to extend its life by two years without holding an election, arguing that he could not accept a non-mandated post.

To express his political voice in the post-unification era he formed the al-Minbar Party and published a newspaper of the same name. In the 2006 presidential elections, Faisal was selected by a coalition of what became known as the Joint Meeting Parties (JMP) to mount a credible opposition to the incumbent president, Ali Abdullah Saleh. Saleh received 77 percent of the votes while Faisal won a significant 21. 81 percent. He could only have achieved this with votes from the northern and southern parts of the country well beyond the borders of his native Hadhramaut. He campaigned for the principle of presidential accountability and for the pressing need to replace 'the regime of an individual by an institution for building the country and its citizens'.

During the few years before his death, in between journeys for medical treatment to India and London, he continued to advocate dialogue as the key to resolving the country's mounting political crises. A deeply committed Muslim, whose lifestyle was simple and family-orientated, he will be remembered not only for his integrity and for the ethos of public service which he personified, but also for his courage and fortitude. He is survived by his son Tammam and four daughters.