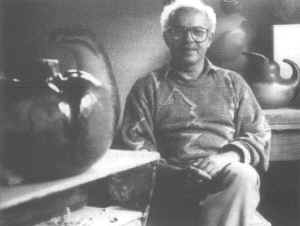 Abdo Nagi Abdullah Kaid was born in the village of Shuhali, Ibb Province, during the reign of Imam Yahya; his father owned a terraced farm and made traditional wooden locks. From early childhood Abdo spent many long days on rugged hillsides watching over his father’s goats, fascinated by the shapes, colours and textures of the rock-strewn landscape. Sent one day on an errand to Jibla, he marvelled at the architecture and the busy commercial life of the town, realising for the first time that there was a wider world of which no-one had spoken to him before. Shortly after his 12th birthday, his urge to receive education proved overwhelming and, having failed to persuade his father to release him from working the farm, he packed a few belongings and set out alone for Aden, arriving a few weeks before the visit of H. M. The Queen in 1954.

Working long hours for Arab families, he had no opportunity for schooling until in 1959 he began work for British expatriates who encouraged his studies. In 1962 he journeyed home to marry Nadia, his childhood sweetheart, but had to return alone to Aden, leaving her behind with her parents. Between 1959 and 1965 he worked for five different families, all of whom spoke very highly of his character and ability, and to whom he was extremely loyal. As British withdrawal drew closer he pressed me, as his employer since 1965, to take him back to England when the time came for me to leave Aden. I pointed out all the possible drawbacks but was impressed by his determination, so, with help from the British High Commission, we travelled on a BOAC flight to England on 22 October 1967. Thus he came to Letchworth in Hertfordshire and was installed in the garden flat at the rear of my house. Within a few weeks he saw snow for the first time.

The following spring we went to see the Spalding tulip fields in full bloom, and his obvious delight with their colour led to the purchase of a box of watercolour paints which he began to use to good effect. Thus his latent artistic talent found expression for the first time at the age of 27.

In 1970, having worked part-time in a Wimpy Bar and at a small local hotel, he decided to visitYemen to persuade his wife to join him in the UK. By early 1971 they were back and their daughter was born some months later. Between 1971 and 1973 Abdo passed a Catering Course at Letchworth College ofTechnology and an Art Course at Hitchin College of Further Education, obraining 'O’ and’A’ levels in Art. Having then spent a year working full-time in an engineering factory, he was appointed Assistant Technician in the Art Department at North Herts College, which at last gave him the artistic environment he needed. Still painting, he soon found himself working in the Pottery Section and realised that clay could help him reproduce the forms, textures and colours recalled from his childhood. So he set out to learn all he could about ceramics, obtaining ‘A’ level in Pottery in 1976.

Two years later his work was shown publicly for the first time at Hitchin Museum to be followed by Letchworth Museum in 1979, and later by The Gallery, Wellingborough. Meanwhile in 1978 he had moved with his wife and daughter to a house of their own, and his son was born in November that year. The garden flat was then turned into his studio.

From 1984 to 1988 he studied for his BA(Hons) Degree at Middlesex, and, following his Degree Show at The Mall Galleries, London, was invited to exhibit by private galleries in London, Alresford, Great Bircham and Ashwell. Shows mounted by The Crafts Council (1991), The Contemporary Art Society (1992) and The Craft Potters’Association (1993) were followed by ‘A Celebration ofArt’ at St. Alban’s Abbey (1993), The Arab Fine Art Exhibition, London (1995) and ‘Decorative Arts Today’ at Bonhams, London (1995, 1996 and 1998); these led to further exhibitions in London, Leeds, Canterbury and Beverley. In 1995, as a member of the Hertfordshire Arts Forum, he exhibited in an International Crafts Festival in Hungary and his work won First Prize ‘Keramia.

During theYemen Festival in London in 1997, five of his pieces were shown at The British Museum, and retained there on ‘indefinite loan’. In 1998 his work was included in ‘Interiors’, an exhibition at the British Ambassador’s Residence in Paris, and in 1999 was also shown at the third Arab Communities Conference at the University of Westminster.

Members of the British-Yemeni Society and others who attended the Art Exhibition sponsored by the Society at The Kufa Gallery, London, last November, will recall the purity of form and beautiful individual colourings which charactensed Abdo’s glazes. Very self-critical and always looking to develop further, he was full of ideas during the last six months of his life for new glazes and shapes.

A loyal British citizen, Abdo remained proud of his Yemeni origins; his last visit to Yemen was with the tour organised by the Society in 1998, when his brother, Sa’ud, and other Yemeni friends entertained the whole group to a delightful supper party. in Ta’iz.

Abdo’s untimely death in hospital on 9 April, following a devastating heart attack the previous day, has taken from us a significant ceramic artist and a modest, caring, and charismatic man whose friendship was cherished by all who knew him; I feel it a great privilege to have been one of their number; in his ceramics he speaks to us still.