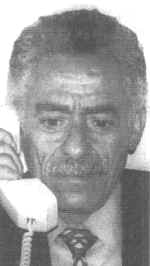 Jarallah ‘Umar was born in Kuhal in the province of Ibb. His father, a teacher in the village school, died some six months after his birth, After receiving his basic education in Kuhal, he moved north to Dhamar to study at the Madrasa Shamsiyya, and then in 1960 moved to Sana’a, where he studied at the Dar al-’Ulum school whose curriculum was broader than that at Dhamar.

With other students he took to the streets in 1962 to demonstrate against the rule of Imam Ahmad, and again a few months later to cheer the Revolution of 26 September; Imam Ahmad had died a week previously and had been succeeded by his son Muhammad al-Badr.

In 1962 Jarallah joined the Yemeni branch of the Arab Nationalist Movement (ANM) which was committed to defending the revolution and to Arab unity. In 1963 he enrolled at the Police College, Sana’a, and after graduation became one of its instructors. Although he and his colleagues in the ANM supported President al-Sallal, they decided that it would be fruitless to oppose the coup which brought Qadhi Abd-al-Rahman al-Iryani to power in 1967. As a police officer, Jarallah was present during the famous 70-day siege of Sana’a by Royalist forces. By now he was one of the leaders of a radical youth movement, called the Popular Resistance, dedicated to defending the capital and distributing food to its inhabitants. The movement’s subsequent opposition to any rapprochement with the Royalists and its demands to share power led to clashes with government forces in August 1968, and Jarallah was arrested and imprisoned for three years. Meanwhile, he had helped to establish the clandestine Revolutionary Democratic Party (RDP), and from Aden, where he settled on his release from prison, he supported RDP elements committed to the overthrow of the government in Sana’a and unification of the two Yemens. In October 1978 Jarallah helped to found the Marxist Yemeni Socialist Party ( YSP) which ruled South Yemen until 1990, and as a member of the YSP Politburo he was well-placed to promote its revolutionary agenda in the north.

Over the years, however, Jarallah became increasingly less radical. He played an important part in the negotiations between North and South leading to unification in 1990, and was active in efforts to prevent the civil war of 1994, soon after which he went to live in Cairo. He returned to Yemen in 1997 to rebuild and revitalise the YSP and in 2000 became its Assistant Secretary-General.

Despite the longstanding enmity between the YSP and the tribal/Islamist Islah Party, Jarallah was keen to establish good relations with the latter, and accepted an invitation to address the opening session of Islah’s third General Conference on 28 December 2002. In his speech he denounced the ‘culture of violence’ which prevailed in Yemen and called for legislation to regulate the possession of weapons and bearing of arms. Having just stepped down from the rostrum, he was shot dead by a religious fanatic, a former member of Islah. Several hundred thousand Yemenis took part in the funeral procession to the Cemetery of Martyrs, Sana’a, where he was buried. He is survived by his wife, four sons and one daughter.