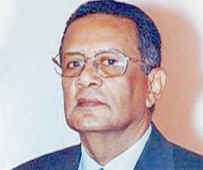 Dr Faraj bin Ghanem, a former Minister, Prime Minister and senior diplomat, was a leading figure in the political and economic life of Yemen.

Following his death on 5 August 2007 he was accorded the national hon- our of a state funeral.

He was born in Shihr in the province of Hadhramaut in 1937, received his primary and intermediate education in Ghail Ba Wazir, and continued his studies in Sudan, graduating from the University of Khartoum with a degree in economics.

After South Yemen achieved independence, he was appointed perma- nent secretary at the Ministry of Finance, but the post which he occupied during much of his career, first in the South and later in unitedYemen, was that of Minister of Planning.

In 1994 Dr Faraj was appointed Yemen’s permanent representative to the UN European Headquarters and Ambassador in Geneva, a post which he held for two terms: initially until his appointment as Prime Minister in May 1997; and again after his resignation in May 1998. He continued to representYemen in Geneva until his death in hospital there in August 2007.

Dr Faraj was the first Prime Minister in the history of the country to resign his post of his own volition, a phenomenon unprecedented in Yemeni politics. The quality which also served to establish him as an unique figure in Yemen’s public life was the modesty of his personality coupled with his deep knowledge of Yemen’s economy and its development needs.

Also noteworthy is that both before and after unification he had no party affiliation, and maintained his political independence until the end of his life.

History will remember Dr Faraj as an outstanding technocrat, a man of great intellect and personal integrity. But also as a man ahead of his time, who found it difficult to cope with the frustrations of being in high office without the authority to change and reform Yemen’s style of governance. Had the political environment been more favourable, Faraj bin Ghanem would surely have been able to make a greater contribution to the social and economic welfare of his country.