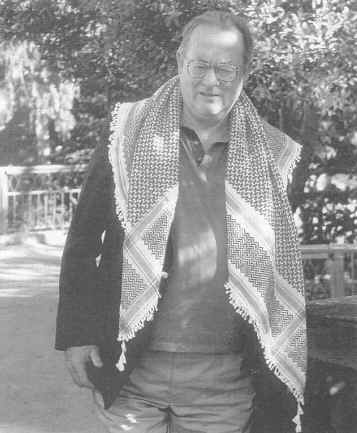 Obituaries have been published in The Times and Daily Telegraph, in The Yemen Times and Al Ayyam, so here I shall concentrate on the considerable debt which the Society owes to Jim.

I first met him in 1962 in Aden, and his deep knowledge of Yemen and the very special affinity which he had with Yemenis was instantly clear. After our departure from Aden in 1967, we remained in touch over the next 25 years, and so it was that in 1993, when I was encouraged to try and start a British-Yemeni Society, he was one of the first people I turned to. He was the foundation stone on which the Society was built. His contacts with his manyYemeni friends and the British who had lived and worked in Yemen over the last half century ensured that the membership list grew swiftly. One of the most thankless tasks in a Society such as ours is that of treasurer, and volunteers are hard to find. For six years Jim produced no less than three highly competent treasurers to look after the Society’s finances. I often wondered, but never dared ask, how he persuaded them to volunteer. I have a suspicion that his military training, as much as his diplomatic skills, played a part.

He organised the first tour of Yemen for Society members in 1995. So popular was it that he led two more tours in succeeding years, producing not only new members for the Society but a healthy addition to Society funds through his expert manipulation of the dollar/sterling exchange rate. One member on his first tour was Dr Harry Robertson who had worked with the Keith Falconer Mission in Sheikh Otliman and Beihan in the 1960s. As a direct result of his visit, Dr Robertson returned to Aden as the acting Director of the medical clinic in Tawahi run by the Church of England, a clinic which has been the subject of the Society’s Christmas Appeal. Whilst on these visits, Jim did much to foster the Society’s excellent relations with its sister organisation in Yemen, the Yemeni-British Friendship Association.

He made several contributions to this Journal, and with Derek Matthews produced a booklet entitled Yemen:The Two Parts, which recorded their early memories and recent impressions of the country and was published at the time of the Yemen Festival in 1997. He also wrote a valuable paper on the border between Hadhramaut and Saudi Arabia, as he knew it in the 1950s, which appears in this edition of the Journal.

Jim was enormously generous with his time. A number of students writing their theses were directed to his door by the Society, and were warmiy welcomed. A few months before his death on 12 January, he recorded recollections of his service in India and South Arabia for the oral history archive of the British Empire and Commonwealth Museum. He was Patron and energetic supporter of ‘Friends of Hadhramaut’, another Charity supported by the Society’s Christmas Appeal. He was a true friend of Yemen and will be greatly missed. Our sympathy goes out to Joanna and Richard.