Most British members of the expatriate community in Aden prior to its independence served there for a limited number of years before moving on elsewhere. Few ever returned to Aden. Alan Denny, who died on 5 July 2008 a week before his 91st birthday, was one of those who came back, serving there for nearly fourteen years over a period stretching between 1947 and 1967. For an expatriate his knowledge and experience of the territory and people of both the Colony and the Western Protectorate was therefore almost unique.

Born on 11 July 1917 in South London, Alan Denny started his career with a series of jobs in the City and, with war against Germany looming, joined 53 City of London Brigade of the Territorial Army in 1936. His unit, an artillery one, was sent to France with the British Expeditionary Force, but when German advances and the collapse of the Belgian army forced the BEF to retreat, he was cut off and unable to reach Dunkirk with the main force. Instead, with one or two others, he attempted to get out of France by heading South to the Mediterranean coast. Hitching lifts with cooperative French lorry drivers before the French lines were broken, they reached Marseilles and found a ship which took them to Gibraltar and so returned to England. 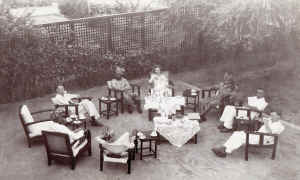 Before going to France, Alan Denny had also become a Special Constable in the City of London Police. This police experience led by a turn of fortune to his appointment in 1941 to the Kenya Police. At that time, following Mussolini’ s declaration of war on Britain, Kenya’s northern frontiers faced a threat from Italian forces in Ethiopia and Somaliland and he was posted to the remote but sensitive border district ofTurkana.

In April 1947 Alan Denny married Catherine Sayer and transferred to Aden, where his daughter Rosalind (Roz or Lindy), the TV expert and writer on cookery, and, three years later, his son Andrew were born. His new position was in the Government Guards, a police/militia force of about 500 men at that time, which provided the Political Officers in the Western Protectorate with their bodyguards and helped them to maintain law and order. Their duties included the manning of a number of small posts in particularly difficult locations, including some on the ProtectorateImamate border. Denny’s principal role was to supervise the proper functioning of these garrisons, requiring much travel, sometimes to areas which motor vehicles could not reach, together with a good understanding and at times some tactful diplomacy with the Protectorate chiefs concerned. When one or other of his two more senior officers was on leave he also acted as Deputy Commandant.

In 1952 Denny transferred to the Aden Colony Police, with whom he served as a senior Superintendent until 1956. Throughout their time in Aden, Catherine was the Judge’s secretary in the Aden Appeal Court. His career then led them to the West Indies, where he became an officer in the Trinidad Special Branch, and in 1959 to a similar post in the Tanganyika Police. When Tanganyika gained independence in 1962 (together with the other East African territories held by Britain) most of its expatriate Colonial Service officers were pensioned off and had to find new careers. Denny spent a brief period in Liberia, working as a security officer for a diamond company, before returning to Aden in 1963 in the rank of colonel to a headquarters post in the newly established Federal Guard (expanded out of the Government Guards), where his previous experience was to be of considerable value. His family was still with him and they lived in Champion Lines, but they had to cope with the hazards faced by many senior officers during that dangerous period. A bomb under his car failed to go off, but his children recollect that he slept with a revolver under his pillow and that the interior lights of his car were disconnected to avoid presenting an illuminated target to any assassin when he opened the car door at night. He was made an MBE for his service with the Federal Guard, remaining with them until the British departure from Aden in September 1967.

After filling in time as a Probation Officer in Buckinghamshire, Alan Denny then returned to theWest Indies to spend the remaining eight years of his career with the Jamaica Police as a Special Adviser, mostly concerned with training. He finally retired in June 1978, when he was awarded the Jamaica Order of Distinction. He and Catherine had divorced in 1976 and he was later married to Dorothy Shackleton, who died in 1993, and then shared the last ten years of his life in Sedlescombe, Sussex, with Audrey Miller, who survives him together with his two children and two granddaughters.

Alan Denny was a kind, warm-hearted, generous and hospitable man, very self-reliant, full of energy even in his later years, and interested in everything and everybody around him, although he rarely spoke of his past experiences. He will be greatly missed not only by a family of which he was exceedingly proud but also by the many friends he accumulated wherever he went over his long and varied career.