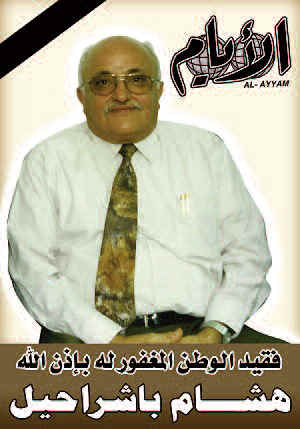 Hisham BaShraheel Hisham’s death on 16 June 2012 grieved many within and well beyond Yemen’s borders; numerous obituaries referred to his generosity of spirit as an abiding characteristic. He was highly respected by the ordinary person in the street, men and women in Yemen’s corridors of power and, not least, by the journalists who knew him well through his newspaper al-Ayyam. He was its Editor-in-Chief and even those who opposed his approaches to Yemeni political commentary held him and his work in high regard; indeed Hisham’s life story is inseparable from that of al-Ayyam’s and journalism in Yemen.

Hisham was born on the 19 June 1944 in Tawahi town to the veteran journalist Mohammad Ali Omer BaShraheel, who then worked for the long-established (British) Cable and Wireless Company and also headed Nadi al-Islah al-Arabi (The Arab Reform Club).2 Mohammad BaShraheel also owned and edited the Arabic newspaper al-Raqeeb (The Observer or Guardian) and the English weekly The Recorder. Hisham’s uncle, Mohammad Ali Luqman, was editor of the al-Qalam al-Adani (Aden Pen). His uncle Abdul Rahman Girgirah was chief editor of the daily al-Yaqdhah (The Awakening) and later of the weekly al-Nahdha (Renaissance). In 1960, his aunt Mahiah Nageeb, (nee Mahiah Mohammad Omar Girgirah) published and was chief editor of the monthly Fatat Shamsan arguably the first woman’s magazine in the Arabian Peninsula. In 1958 Hisham’s father founded, edited and published al-Ayyam which in due course became an institution in its own right. All these and a wide spectrum of other journals, newspapers, societies and clubs contributed to a vibrant new economic, cultural and political age from the late 1940s until 1967.

Hisham received his primary education in Tawahi, then joined the Crater Middle School in Seira and in 1958 entered the prestigious Aden College; not surprisingly soon after finishing secondary education he joined al-Ayyam.
Shortly after independence3 in 1967 all free or opposition press were closed by government decree and the BaShraheel family moved to Sana’a to trade in paper and in sales and repairs of printing equipment such as the stencil.4 Hisham went to the USA on a training course in the maintenance of printing equipment.

On the 7 November 1990, in the new Republic of Yemen, Hisham and his younger brother Tammam, republished al-Ayyam and, by the beginning of 1994, had taken it rapidly from a weekly to three times weekly to a political daily edition, with a sports issue three days per week. It became the largest mass circulation independent national newspaper. It was highly critical of President Ali Abdulla Saleh and his closest associates. It published well-documented reports on issues of corruption in high office, injustice, and partisanship in managing southern region issues. This irked the ruling elite unaccustomed to serious intellectual opposition, and at best risked closure. Al-Ayyam’s electronic version kept Yemenis abroad informed. Hisham and Tammam could not have run the paper so effectively without the additional talent and dedication of their family and the exceptional pool of staff and journalists.

The regime responded by escalating pressure through warnings and illegal challenges by gangs of thugs demanding land rights to the personal homes of the Ba-Shraheels as well as to the paper’s offices in Sana’a.
However, most damaging was the forcible interception of al-Ayyam’s distribution buses and the confiscation of entire consignments of some fifty thousand copies of the paper allocated to various governorates. Trials in the specially convened Seera Court of First Instance followed. Hisham was charged on 10 May 2010 with offences that included ‘publishing false information’, ‘instigating the use of force and terrorism’, ‘insulting public institutions’ and ‘threatening Yemeni unity’. He was also accused of inflaming feelings against the ruling elite by publishing front page photographic evidence of atrocities inflicted upon peaceful anti-government demonstrators. When all failed military force and imprisonment were used.

When I visited al-Ayyam’s headquarters in Aden in May 2009, it was manifestly under siege. The ever-courteous Hisham introduced me to those present. Famous columnists now sat meditating an unknown future. The mood in al-Ayyam’s compound was that of a vigil, aware that a mere telephone call from the president would change everything. Indeed the compound was soon assaulted, Hisham’s family home was bombed by rocket-propelled grenades (RPGs), al-Ayyam was forced to cease publication and on 6 January 2010 Hisham and his two sons were imprisoned.

During my return visit to Aden in 2010, the absence of al-Ayyam was acutely noticeable; a loss that felt as if a large part of the guiding spirit of Aden was missing. Newspaper vendors bemoaned the paper’s absence and the lost income from its sales which had kept the heads of many a family above water.

Nearly a year after imprisonment Hisham was offered release from detention on the grounds of his deteriorating health. He declined until his sons Hani and Mohammad were also offered release. He left prison a week later to receive treatment in Saudi Arabia. But his health continued to deteriorate and on 24 April 2012 he left Yemen for Germany on what was to be his last journey for treatment. He died there on 16 June 2012.

Hisham played a major role in his newspaper’s focus on exposing unbridled corruption, called for decency and democracy in governing Yemen and justice for a South that was plundered for personal use by an uncaring ruling elite in Sana’a. Other newspapers were forcibly closed at the same time as al-Ayyam but the especially harsh and vindictive treatment meted out to Hisham and his paper starkly revealed the regime’s limits of tolerance.

In addition to his distinguished career in the world of journalism, he is also remembered for his significant but less public role in preserving Aden’s archival material.5 His son, Basha, kindly listed for this obituary al-Ayyam’s collection of digitized electronic archives, stored in Canada and the USA. These comprise some 4.5 million images covering the period 1954–2008: thousands of colonial government documents relating to Aden’s demography prior to 1967; treaties with the Federation of South Arabia and the Aden Protectorates; a complete archive of Public land and land leases before 1990, and a complete set of Laws in Aden and other parts of the South from ca.1920 until 1989. Moreover, the electronic archive contains all the songs produced by Southern artists, including rare recordings that have disappeared from the public domain.

1 The author here is indebted to the many who helped; Nageeb Yabli and Awad bin Awad Mubgar, despite their grief, took time to send their personal memories of Hisham as a friend and/or colleague. The Editor of al-Yaqdha journal and journalist Nageeb Yabli very kindly permitted me to translate and freely use the anguished eulogy given by Nageeb soon after Hisham’s death.

2 Tawahi town was the major port district of Aden Colony.

3 Following the departure of Britain from South Arabia the People’s Republic of South Yemen came into being.

4 The stencil duplicator or mimeograph machine (often abbreviated to mimeo) is a low-cost printing press that works by forcing ink through a stencil onto paper. Whilst in Sana’a Hisham became an expert in their repair.

5 Hisham’s son, Basha, kindly permitted publication of his father’s photograph in this Journal.