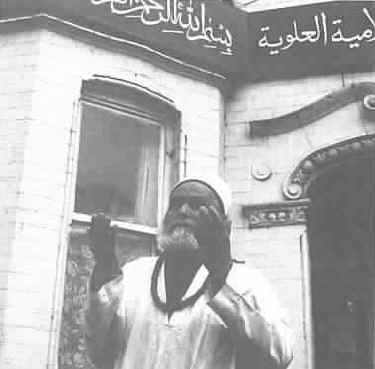 The death of Shaikh Muhammad Qassim al-’Alawi in Birmingham on 2 June 1999, aged ninety, is a grievous loss to the Yemeni community in Britain, to whose spiritual welfare he devoted the greater part of his long life.

Shaikh Muhammad was born in the village of Shamir, near Ta’iz, where he had a rudimentary education and helped herd the family’s sheep before migrating to Cardiff in 1925 at the age of fifteen. There, like many of his compatriots, he found employment as a sailor in the British merchant navy and toured the world. He joined the local Cardiff branch of the ’Alawi Sufi Order (tariqah) led at that time by Shaikh Hassan Isma’il (and also, for a while, by Shaikh Abdullah al-Hakimi before he left to join the political reform movement in Yemen). The ‘Alawi Sufi Order was based at Mustaghanem, in Algeria, where it had been founded by Shaikh Ahmad ibn Mustafa al-’Mawi (1869-1934), a highly respected mystic who, by the end of his life, had attracted tens of thousands of disciples from many different countries, notably Yemen and Syria. When Muhammad Qassim travelled to Algeria to visit Shaikh Ahmad, the latter granted him the title of ’Shaikh’, but he always preferred the lesser title of ’Muqaddam’.

Having satisfied his taste for travel and completed his Sufi training, Shaikh Muhammad felt ready to dedicate his life to the religious service of the Yemeni community in Britain. In 1941, at Shaikh Hassan’s suggestion, he moved from Cardiff to Birmingham where local social and economic conditions, including intermarriage with non-Muslim women, had led many Yemeni expatriates to follow a non-Islamic lifestyle.

In Birmingham, Shaikh Muhammad established the city’s first zawiya at his home in Edward Road, Balsall Heath, an inner city area where many Yemeni families had settled. There he combined the roles of teacher, prayer leader and spiritual guide, and became a father figure within the Yemeni community.

According to his expressed wish, Shaikh Muhammad was buried in Birmingham. His funeral was attended by a large number of Yemenis from all parts of Britain; and those who came from the homeland to pay their respects included the President’s brother, General Muhammad Abdullah Saleh, and Dr Abdullah al-Shamiri.

The death of this selfless and much loved figure has left a spiritual gap in the life of our community which will be hard to fill.