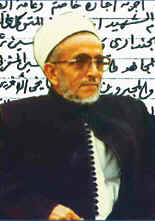 Qadhi Ismail al-Akwa', one of the most influential Yemeni thinkers of the 20th and early 21st centuries, died in October 2008. His life's journey was shaped by gifts of birth and family, by national and international events, and by his own determination to forge a distinctive academic career. His generation epitomised a Yemen rooted in its ancient culture and history, yet subject to the inescapable demands of modernity.

A detailed account of Qadhi Ismail's life and legacy, based on an interview with Ibrahim Bajis al-Maqdisi, appeared in Dar al-Qalam, Damascus, in 2005, and included reviews of his fourteen major works. These covered diverse topics from archaeology and ancient Yemeni languages to genealogy, the Rasulids and an encyclopaedia of Yemeni proverbs. He taught and published extensively in Yemen, and lectured as far afield as America, India and South East Asia. His death engendered numerous tributes not only to his outstanding scholarship but also to his human qualities, evoking the image of a venerable, softly-spoken man of genuine humility. The Yemeni Ministry of Culture published a memorial volume entitled 'fi wida'a shaikh al-mu'arrikheen, thakirat al-yaman ...' ('Farewell to the pre-eminent historian - memory of Yemen') which highlighted Qadhi Ismail's contributions to Yemeni cultural history. A series of interviews with Kamal Ali al-Hijri and Gregory Johnson retold his story in the English language Yemen Times. Qadhi Ismail's thoughts and works have been widely quoted by Western writers on Yemen's tribal and religious history.

He was born in Dhamar into an ancient family steeped in the pursuit of knowledge and religious studies. Not a judge himself, he inherited the title of Qadhi from his father. Following earlier tuition by his father and elder brother Muhammad, he received instruction in the Islamic sciences in the prestigious schools of Dhamar and Ibb. His teachers included luminaries such as Hassan bin Zaid al-Dailami and (in Aden) Muhammad Salem alBeihani. Although his ancestors were Zaidi, his great grandfather, Ahmad bin Abdulla al-Akwa', decided to adopt the Sunni persuasion.

A period of rapid geopolitical and economic change in the Middle East, impinging on isolationist Yemen, brought him into contact with other disaffected Yemeni intellectuals who fell foul of the Imam. He spent three years in Hajja prison before being released in 1950 when he left for Aden, then a refuge for political activists from Yemen. There he taught Arabic at the American Consulate and continued his involvement in the Free Yemenis' Movement, publishing articles incognito in Fatat al-Jazirah and the popular satirical magazine, al-Fadhool. Having lived as an exile between Cairo, Aden and Damascus, he eventually made his peace with Imam Ahmad in 1959, and the following year was appointed secretary to the Yemeni legation in Moscow. After the overthrow of the Imamate in 1962, his various political appointments in the Yemen Arab Republic culminated in the post of Minister of Information. However, he yearned to return to academic life and the study of Yemen's cultural heritage. In 1969 he founded (and remained its president until 1990) the General Organisation for Antiquities and Libraries in Sana'a which, in addition to several regional museums, was to include responsibility for the city's 'House of Books' and 'House of Manuscripts' which developed into an internationally known repository of key historical documents and archival material.

Qadhi Ismail's election to the prestigious Aal al-Bait Institute for Islamic 66 Thought reflected the high regard in which he was held in the Arab world. Western students of Yemen's cultural history will be familiar with his important monograph on the life and times of the celebrated scholar and poet, Nashwan ibn Sa'id al-Himyari (died 1117 AD), which was published in Yemen: 3000 Years of Art and Civilisation in Arabia Felix (1987). His paper (in Arabic) on the 'The hidden reasons for the Yemeni people's resistance to Ottoman rule' ('asrar muqawamat ahl al-yaman lil-hukm al-uthmani'), which was published in New Arabian Studies 3, University of Exeter Press, 1996, reflects the wide scope of his research interests.

Qadhi Ismail's reputation as an original thinker is perhaps best illustrated by his acclaimed five volume encyclopaedia 'hijrat al-ilm wa ma'aqiluhu fi al-yaman' ('The migration of knowledge and its strongholds in Yemen') which took him some twenty five years to accomplish singlehandedly. Another important work was his treatise on the development of Zaidi theology ('al-zaidiya wa nashaataha') which he considered to be the most moderate of the Shiite schools and closest to Sunni belief and practice.

Not unlike his renowned ancestor, Muhammad al-Shawkani, he advocated the pursuit of knowledge and objective enquiry in preference to blind adherence to sectarian dogma.

In addition to his immense contribution to the historiography of Yemen, Qadhi Ismail donated his own collection of manuscripts and rare books to Sana'a's Dar al-makhtutat (House of Manuscripts) in the old city. He is survived by his two sons and two daughters.