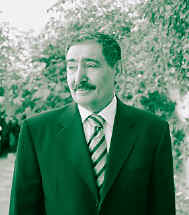 Abdul Aziz Abdul Ghani died in Riyadh on 22 August 2011 of the wounds he suffered in the attack on President Ali Abdullah Saleh's compound in Sana'a on 3 June. No man who acted as Prime Minister for a total of fifteen years – 12 in the old Yemen Arab Republic and three in the unified Republic of Yemen – could have been other than a figure of great importance in the modern history of his country. Since his sad demise the official media and Yemeni government spokesmen routinely refer to him as 'the nation's martyr' [Shahid al-Watan]. But, although he was a great survivor and – ipso facto – a man who must have possessed some inner steel, I do not believe that Abdul Aziz Abdul Ghani sought struggle or martyrdom. He was a peacemaker, a conciliator. He did his good work without confrontation or rancour.

Born in 1939, Abdul Ghani was one of the stars of his generation of Yemenis. Like several others, he was sent for higher education in the USA in the 1960s. Although four years younger, Abdul Ghani graduated in the same year – 1962 – as Abdul Karim al-Iryani, the other leading figure among Yemenis born in the 1930s. Abdul Ghani and Iryani also were awarded their Master's degrees in the same year – 1964. Abdul Ghani did not have Iryani's intellectual capacity or his breadth of vision. However, given his long experience of public life, he was important as a source of advice to Ali Abdullah Saleh.

Some will criticise Abdul Ghani for being too much the President's loyal servant. But others would say that his natural inclination towards conciliation, and his skill as a conciliator, helped to keep the President on the straight and narrow, at least some of the time. I leave it to history to judge whether Abdul Ghani and Iryani could have done more to restrain Saleh from some of his wilder actions, such as the opposition to UN Security Council resolution no. 678 of 29 November 1990, which authorised military action to remove Iraqi forces from Kuwait. As for the events of this turbulent year, 2011, I think it is too early to assess the parts played by the various Yemeni protagonists. Although educated in the USA, Abdul Aziz Abdul Ghani had a soft spot for Britain. He was a frequent visitor to London, where he tended to stay for weeks – or even months – in private rented accommodation. He was also delighted to be able to make an official visit to Br itain as Pr ime Minister in the mid-90s. Abdul Ghani, by then a member of the Consultative Council (which he was later to chair), was a good friend to me as HM Ambassador in Sana'a (1997-2001).

When the FCO chose to allow our relations with Yemen to be governed by a consular problem, I needed a back channel to ensure that the fundamentals of that relationship were not damaged. Abdul Ghani's wise advice and sympathetic mediation saved the day for me – and, more importantly, for the UK. I shall be eternally thankful to him for that.