It has been an eventful year for Yemen, especially since January when the Arab Spring reached Yemen and generated the same sort of youth demonstrations that have taken place in Tunis, Cairo and many other Arab capitals since then – and in the case of Yemen continue. There has been a prolonged political crisis as Yemenis try to resolve their differences over the future shape of their government. This seemed on the point of reaching a violent climax at the beginning of June when President Saleh was injured but the main actors have since reverted – with international assistance – to seeking a peaceful solution in the interests of all Yemenis. Meanwhile, many Yemenis are finding great difficulty in their daily lives with shortages of fuel and basic commodities and parts of the country appear to be slipping out of central government control. All this makes the need for a solution more urgent.

The British Yemeni Society (BYS) is bound by its constitution which defines the objectives of the society as "to advance public education and knowledge concerning the republic of Yemen, its history, geography, economy and culture". It does not comment on political matters but it cannot ignore events in Yemen that affect the daily lives of many Yemenis including relatives of our members. We can only urge that those involved in the political process in Yemen and outside redouble their efforts to find a solution and find it quickly.

The BYS has been planning with the London Middle East Institute at SOAS to organise a conference on Yemen on 30 and 31 March 2011. A planning committee has been set up and we are ready to issue a call for papers. We need to raise at least £10,000 to get it going and have received indications that we should be able to obtain this, but it is difficult to take the project forward in the current circumstances. It remains our aim to hold the conference in 2012 even if we cannot do it in March. It will discuss the broad range of economic and social development needs of Yemen and address cultural issues.

Yemen and the UK

There has, of course, been an enormous amount of press coverage on Yemen, mostly about the political situation. One possible benefit in the long term is that it has increased British public awareness of Yemen.

The media has shown much greater understanding of the complexities of Yemen and the quality of reporting and analysis has improved, albeit not always consistently. The Yemen Forum programme at Chatham House has organised a steady stream of conferences, discussions and papers on Yemen, and I am delighted that its work will continue.

Members of the British-Yemeni Society have been active in the media, speaking as individuals and not in the name of the BYS, notably Ginny Hill and her colleagues at Chatham House. Stephen Day and James Spencer have made notable contributions, and even I have done a Pod cast for the Economist and briefed some outlets unattributably. Tom Finn has produced some excellent first hand reports in the Guardian from Sana'a.

On 24th February 2011 – BBC3 aired a television documentary, A Dangerous Place to Meet My Family – an account of Sheffield-born Dean Whitney's journey to Yemen to meet his extended family.

There have been three new books on Yemen by BYS members:

Seen in the Yemen: Travelling with Freya Stark and Others by Hugh Leach.
Yemen Divided ... My modest contribution to the history of the People's Democratic Republic of Yemen.
A Quarter-Century in Diplomacy 1994-1969 (Arabic: rub' qarn fi al-diblomasiya) by Dr Abdulaziz Ali Al-Qu'aiti.
There have been several others by non-BYS members, and I know of at least three more that will be published over the next year.

The BYS remains active in the decorative arts:

Gillian Hills continues to develop her Yemeni mosaics and has generously offered her large one of Sana'a as a gift to the Embassy of Yemen
British-Yemeni Tasleem Mulhall had another exhibition of paintings and sculpture in Isleworth in November 2010.
In addition, there has been the exhibition at the Royal Geographical Society in London: The Artist's View – 7 Artists in Yemen. This followed a similar artists' exhibition at l'Institut du Monde Arabe in Paris in February which some members were able to attend. Members of the BYS were invited to a lecture on 4th April 2011 at the Italian Cultural Institute about Amedeo Guillet who had featured in the 2008 Journal.

In conjunction with an exhibition of photos of Yemen by Pat and Charles Aithie at the National Library of Wales in Aberystwyth, Pat Aithie gave a lecture on 23 March 2011 entitled Yemen: From Aden's Steamer Point to Cardiff's Tiger Bay. Pat had also had an exhibition of her work in Cardiff in July/August 2010.

The award-winning Yemeni/US film The Oath was screened in London cinemas in March 2011 and a Yemeni participant, Boushra Almutawakil, featured in an exhibition (My Father's House) at the Brunei Gallery at SOAS in late 2010.

The first prize for the essay was awarded to Warda Eissadi for Smile! You are in Yemen and second prize to Fernando Carvajal for Decentralization through Dialogue. Warda's essay will be published in the 2011 Journal.

This year's academic grant has been awarded to Benedict Wilkinson for fieldwork towards his PhD on counter-extremism strategies operated by the governments of Egypt, Saudi Arabia and Yemen.

We organized a number of events during the past year:

14 October 2010: Screening of the documentary film Humanitarian Citadel which tells the story of the ICRC's humanitarian mission to Yemen in the 1960s.

2 November 2010: Donna Kennedy-Glans gave a talk entitled Wielding Hope like an Axe: How to recognise and support Yemeni Youth as positive change leaders – which focused on her work with Yemeni youth leaders.

8 December 2010: Belhaven of Arabia: The Scottish Lord who loved the mountain Arabs – a joint lecture with the Society for Arabian Studies by BYS member, Trevor Mostyn.

24 March 2011: General discussion on Yemen (in lieu of HM Ambassador Jonathan Wilks' talk which was postponed at the last minute).

3 May 2011: HMA Jonathan Wilks gave his perspective on Yemen after his first few months in post there.

18 May 2011: In association with the Royal Society for Asian Affairs and the Society for Arabian Studies (now the British Foundation for the Study of Arabia), BYS member Hugh Leach gave a lecture Seen in the Yemen: Travelling with Freya Stark and Others followed by the launch of his book under the same title.

The full autumn programme will be sent out with the 2011 Journal at the end of the summer. One of our speakers will be Thanos Petouris – awarded the BYS academic grant in January 2010 – to talk about the results of his research.

BYS member Dr Salma Samar Damluji will be speaking on the Restoration of the mosques of Sah and 'Aynat in Wadi Hadhramaut at the July 2011 Seminar for Arabian Studies (to be held at the British Museum).

Christmas appeal for Dr Salem Yousr was very successful. We are delighted to have been able to support his fieldwork in Soqotra and that he has been able to attend the AGM. He has presented the BYS with a delightful wooden artefact in the shape of Soqotra, which we will display at future events.

We are delighted to welcome new members to the Society – 18 since last year. We regret to have learned of the death of three members in the last year: Marjorie Fleming, Robin Allen and Alawi Barakat.

The committee co-opted Thanos Petouris during the year to provide representation for our younger members. He has been very active on our behalf and has established our presence on Facebook.

I would like to thank all members of the committee for their support, in particular Rebecca Johnson for all her work as our secretary, and John Mason for so calmly keeping our finances in line.

The BYS will need to change and that I would like to present the 2012 AGM with our ideas on how we can take the Society forward. I don't want to pre-empt this but it seems to me that:

The BYS needs to recruit younger members and ideally more from the British Yemeni community in the UK.
The BYS should have an events secretary who has the time to build a programme that will attract and hold new (and existing) members and relieve the load on Rebecca.
We should organise a conference on Yemen (as proposed for 2012) if we can raise the funds.
We may need to revise the constitution to take into account the changes but also make sure it fits existing as well as any new activities.
I would like to invite anyone with ideas to put them forward to the Committee or join a small ad hoc group that will look at how we should develop the Society.

I would also like to let members know that the Committee has decided that we should request all BYS members to make a voluntary donation (suggested £5) towards the cost of future events, that guests of members make the same donation but that other non-members attending events should donate £10. Unfortunately, the cost of events continues to rise and is not covered by the subscriptions.

Finally I would to thank His Excellency Abdulla Ali al-Radhi, our joint honorary president, for his generous support for the BYS and for hosting the reception that will follow. 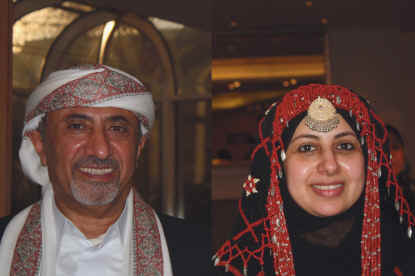